When chasing Tommy, Kara, Danny, and baby Steven down the hallway, Michael was portrayed by A. Michael Lerner. The Smith's Grove doctor running from Michael was in fact A. Michael Lerner's real life father. He also portrayed a few other various scenes across the movie. The mask he wore was a larger version of the one that Wilbur had worn. He was chosen because one of the producers thought that Wilbur was too bulky and they wanted someone that was more slim, and the other reason he was brought in was to keep the filming of the alternate ending a secret. 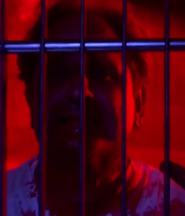 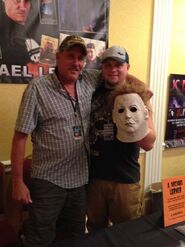 A. Michael Lerner in Halloween: Forty Years of Terror event (2018)