Allyson Nelson is a character in the Halloween franchise. She first appeared in Halloween (2018). She managed to survive Michael Myers' massacre on Halloween 2018, alongside her mother, Karen Nelson, and grandmother, Laurie Strode.

Allyson was born in Haddonfield, Illinois in 2001 to parents Karen and Ray Nelson. She also met her grandmother Laurie Strode on occasion, but never visited her house. At some point in her early life, she met her two best friends Vicky and Dave and also her boyfriend, Cameron Elam.

One morning in October, before heading off to school, Allyson sat at the kitchen table to finish off some homework and asked her mother if she had invited her grandmother to the dinner they planned for that evening. Karen explained that she did but Laurie had no intention of coming. Annoyed, at her mother, Allyson left when Vicky and Dave arrived.

When walking to school, Allyson confided in Vicky and Dave and told them about her family's history with Halloween. Dave explained that by today's standards having only a few deaths is not something the town would worry about. Vicky told him to shut up and to lighten the mood, he exploded a nearby pumpkin head and the three friends ran to school. When Allyson is retrieving her books from her locker, Cameron snuck up on her and the two kissed and laughed. They spoke about their costumes for the school's Halloween dance until Cameron's best friend, Oscar came up and jokingly kissed them both on the foreheads. After messing around the three headed to class. While sitting at her desk, Allyson looked out of the window beside her and noticed her grandmother staring at her from across the street. Not thinking much of it, Allyson put her focus back on the class.

She later met with Laurie beside the track field in school where she was given $3000. She refused to take it but when Laurie insisted, she told her she would save it for college. Laurie insisted she forget about college and told her to move somewhere to get away from Haddonfield. Before Laurie left, Allyson explained that she allowed Michael Myers to take priority over her life and it cost her her family. Her grandmother told her that if Karen hates her but is prepared for danger, she can live with that outcome. Later, Allyson managed to get into the honor society and she celebrated with her parents and Cameron at dinner that evening. The four talk about the Halloween dance the next night until Laurie finally arrived. She congratulated Allyson on her achievement and told her about her time in the honor society. However, when she sat down at the table, she began to cry and told them about seeing Michael Myers again as he was being transferred. She left the table and ran out with Karen showing little to no remorse for her causing an angry Allyson to chase after her grandmother.

She eventually reached Laurie and embraced and comforted her. Once she calmed down, Ray and Cameron helped her into her truck and she drove off. Karen then approached Allyson and told her all about her traumatic childhood with Laurie. Ray then comforted Karen and the four left the restaurant. The next night, at the Halloween dance, Oscar took plenty of photos of Cameron and Allyson dressed as Bonnie and Clyde and the couple enjoyed dancing for most of the night until Allyson got a call from Vicky and had to step outside. She told Allyson that she was about to put the kid she was babysitting to sleep and his parents wouldn't be home for hours so they could go to their house and bring some "alakazam" with them. Allyson laughed and told her they would be there soon. However, when she went back into the dance she caught Cameron making out with another girl. Distraught and heartbroken, she ran back out with Cameron not far behind. He apologised and she discovered that he was wasted and was about to leave him until she got another call from Laurie. Angry and drunk, Cameron threw her phone into a bowl of nacho cheese, causing Allyson to leave the dance completely, Oscar accompanying her.

The two walked down the street and Allyson exclaimed that she was so stupid for falling for Cameron's charm but Oscar told her that she was the prettiest, nicest and coolest girl in school and anyone who doesn't appreciate her is a crazy person. She thanked him and he told her about a shortcut to get home faster. The two climbed into a field and when they landed, Oscar kissed Allyson without her permission and she angrily told him to back off. She called him pathetic for trying to force himself on her and she left to walk down the street. When still in earshot Allyson could hear Oscar's desperate cries for help as he was being murdered by an escaped Michael Myers but she took it as him simply calling her back. After a while, she gave in and returned to see what was wrong only to see Oscar's corpse hanging on a fence with the spike stabbed through his jaw. She then spotted Michael Myers walking into her view and ran for her life, screaming and banging on people's doors to let her into safety. She eventually managed to get the attention of people and they let her in to calm her down.

Deputy Hawkins then reached the house along with Dr. Sartain and they took Allyson in the police car with them. The three drive around the neighborhood looking out for Michael and when they spotted him, Hawkins rammed the car into him, rendering him unconscious. Sartain and Hawkins left the car to inspect the body but Hawkins was then stabbed and killed by Sartain who was one that caused Michael to escape in the first place. Sartain brought Michael back to the police car, beside Allyson but took off his mask. He explained that his plan was to reunite Michael with Laurie and they drove off to her house. While driving, Allyson explained that she heard Michael say something and when Sartain stopped the car to hear what she had to say, Michael awakened and Allyson began to panic. However, he simply glanced at her and tried to push the car seat Sartain was sitting in and crush him. He dragged the doctor out and stomped on his head, killing him. This gave Allyson enough time to run and she ran into the woods leading to her grandmother's house.

She ran through the woods as fast as she could until she reached the back of her grandmother's house where she saw the many damaged mannequins and screamed in terror. By the time Allyson got inside, Michael had already arrived and had an intense scuffle with Laurie, managing to throw her off the balcony of her home. Allyson called out for her grandmother, which caught Michael's attention, but Karen quickly emerged from the basement and called out to Allyson and the two hid and tried their best to stay silent. The two began to panic when Michael managed to discover the entrance to the basement and attempted to pry the kitchen island off of its hinges. Karen quickly grabbed a gun from her childhood and pointed it at the entrance. When the island finally came off, she cried out for him to stop and exclaimed that she could not shoot. Michael then appeared at the entrance but Karen revealed to be simply acting and shot him in the face. Laurie then emerged from the darkness and fought him off again, managing to knock him into the basement, with Karen and Allyson quickly running out. However, Michael managed to grab Karen's leg and tried to pull her back down, quickly, Allyson noticed his bloody knife and used it to stab him in the wrist and knock him back into the basement. It was then sealed with iron bars and set on fire by Laurie, finally ending the nightmare.

Allyson and her grandmother see Michael 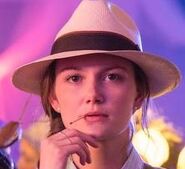 Allyson dressed as Clyde for her school's Halloween dance

Allyson with her best friends Vicky and Dave 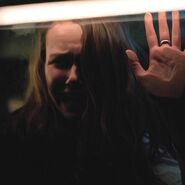 Allyson asking for help while running from Michael Myers 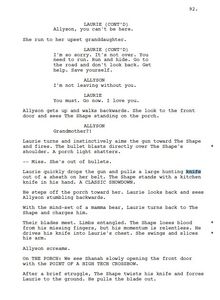 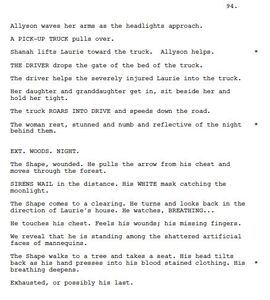