Brady appeared in Halloween 4: The Return of Michael Myers, played by Sasha Jenson.

Brady is the boyfriend of Rachel Carruthers, but he was also pursued by other girls in his class, namely Kelly Meeker. On October 31, 1988, Brady was set to date Rachel for the night but was surprised when Rachel showed up at the store where he worked at. She told him that she had to cancel her plans as she was now supposed to babysit her younger foster sister, Jamie Lloyd. Brady was clearly annoyed at this and told Rachel that he would call her later. As soon as Rachel left the store, Kelly made a move on Brady and invited him over to her house.[1]

Before the two could get intimate, Kelly had to take care of trick-or-treaters, one of which was Jamie - who was followed by Rachel. Brady came downstairs at this point and saw Rachel, who became angry about him being with Kelly. Brady tried to explain himself but his excuses were not good enough for Rachel, who thought Brady was different from the other boys. Kelly then called Brady back into the house so they could get started.[1]

Brady and Kelly were preparing to have sex when they were interrupted by the sudden arrival of Kelly's father Sheriff Meeker, Sam Loomis, Rachel, and Jamie. They quickly got dressed and tried to make everything look in place. They were confused about what was going on and asked Meeker. He handed Brady a gun and told him to go to the attic and make sure everything was locked. He also told Brady that he would not hesitate to use the gun on Brady if he caught him touching his daughter again. Later, he checked up on Rachel and Jamie, who told him that it was Michael Myers that menaced them. Confused as to who he was, Rachel explained that he was the murderer in 1978 and also Jamie's uncle.[1]

Brady discovered the bodies of Deputy Logan and Kelly, so he told Rachel that she had to get out of the house. Rachel did not want to leave her sister behind but did not know where she was. Brady told her that Jamie was probably dead by then and tried to get out of the house, only to find that they were shut in. Jamie appeared upstairs and Rachel went to get her, but Brady saw Michael coming up the stairs. Rachel begged Brady to go with them toward the attic, but he wanted to save her and Jamie. Brady struggled to load his gun and when he finally did, he only fired one shot that missed Michael, who pushed Brady into the wall. Brady then tried to attack Michael with the gun but again failed then Michael grabbed the gun, used it to hit Brady in the face and threw it down the stairs. Brady tried to punch Michael, who blocked the punch, lifted him in the air, pushed his thumb into Brady's face and finally snapped his neck.[1]

Brady tried to explain himself but his excuses were not good enough for Rachel. 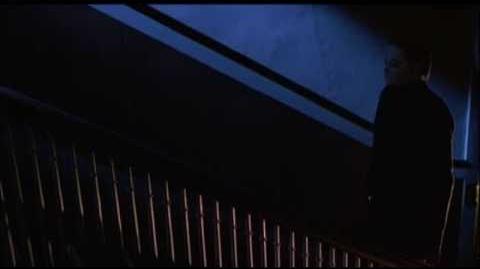