Halloween 4: The Return of Michael Myers

Danielle Andrea Harris is an American television and film actress and director, known for playing two different roles in four films from the Halloween series. She is considered a "scream queen".

In 1988, Harris was living in New York City and managed to get an audition when her mother took her to meet Dwight H. Little, where she auditioned for the role of Jamie Lloyd, Michael Myers' niece, in the movie Halloween 4: The Return of Michael Myers. The scene that she auditioned with was the one where she questions if Rachel loved her like a real sister, and she won the role. She celebrated her eleventh birthday on the set of Halloween 4. As soon as the movie was released, she was allowed to see the movie and thought it was very cool to see her name in the opening. Harris kept her clown costume for years and even went trick-or-treating in 1988 around Queens as Jamie Lloyd. Years later, she sold the costume to a dedicated Halloween fan for his own personal collection.

In 1989, she would reprise the role in Halloween 5: The Revenge of Michael Myers. In the infamous laundry chute scene, Jamie was originally stabbed in the leg but the shot was cut from the film by request of the MPAA because it was deemed too disturbing. Harris still owns the prosthetic leg.

The character of Jamie returned in 1995 for Halloween: The Curse of Michael Myers, but Harris did not participate due to the treatment of her character in the script and the fact that she requested $5000 to appear in the film which, while much less than she was paid for Halloween 4, was not agreed upon. J. C. Brandy ended up playing Jamie in the film, a decision with which some of the fans of the Halloween series were dissatisfied, since Danielle Harris had become very popular with them.

Sometime around 2006, Harris was at a horror convention in Boston and was told by a fan that there were plans for a Halloween remake to be made by Rob Zombie. This was the first time that Harris had heard of this, also being told that there were rumors that she was to play Laurie Strode. Harris told her manager that she wanted a part in the film, however not as Laurie but in a different role. She contacted the production and was told Rob Zombie did not want anyone from the original movies to be in the remake, so she tried by auditioning for the role of Annie Brackett, a character she felt was closer to her own personality. Zombie was impressed with the audition and she won the role. She was later surprised to learn that her character would survive the events of the movie. Harris reprised her role in Rob Zombie's Halloween II, released on August 28, 2009.

Harris was asked if she was to appear in the rumored Halloween III but she said that, since her character was killed off in Halloween II, she did not have any plans to appear in any more Halloween films. However, when Judy Greer was announced to be playing the character of Laurie Strode's daughter in Halloween (2018), Harris said in a live stream that she was "bummed" that her daughter would be included but not be Jamie for what was reported as being the very last Halloween movie, saying, "It wouldn't hurt the movie to have Jamie reunited [with Laurie]" and further stating that she had contacted the producers about appearing in some capacity such as a flashback, but "that didn't happen as they were not interested."[1] 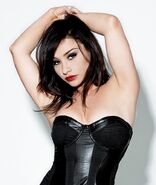 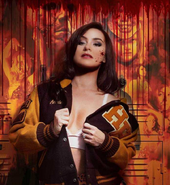 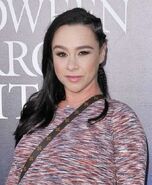 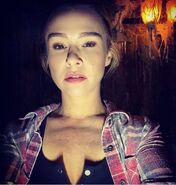