At 5'9, Warlock is the shortest actor to play Michael, even wearing lifts to appear taller.

He was Kurt Russell's personal stunt double for over 25 years. Warlock claims that his personal favorite of the films he has worked on is Jaws, where he doubled for Richard Dreyfuss, but says that Halloween II is his second favorite. Warlock claims that he had a crush on Jamie Lee Curtis during filming. He has also worked on The Abyss, Casino and The Thing. Warlock lives with his wife Cathy and has two sons, Billy Warlock and Lance Warlock, and one daughter named Rhonda. Warlock's son Lance appeared as the youngster in the cowboy hat carrying the boombox and Billy appeared as Craig.

Warlock, along with other cast members who had a death scene, stated in a documentary on the Halloween II: Collector's Edition DVD/Blu-ray special feature that he made sure that everyone was safe when they filmed the death scenes. For example, during Leo Rossi's death scene, where he was strangled from behind, he told the latter to arch his back and arms further as he gave four tugs, telling him to go limp after the fourth tug, and he would cushion the fall.

He sold the mask, knife, scalpel, boots, and jumpsuit he wore in his role as Michael Myers in Halloween II to a Haunted House owner in Ohio in 2003. Warlock claims that because the producers expected Halloween II to be the last film in the series, they let Warlock keep the costume. However, after they did Halloween 4, they realized that they made a mistake and never again let cast and crew take props from the set, therefore subsequent sequels used different masks that looked rather different. The mask Warlock wore is actually the exact same mask (a repainted and modified Captain Kirk mask) worn in the original film. It looks different in the sequel because the paint had faded due to a few reasons, first because Nick Castle, the original Michael, kept it in his back pocket during shoots. Also, Debra Hill kept the mask under her bed for several years until the filming of Halloween II, causing it to collect dust and yellow because Hill was a heavy smoker. The mask appears wider because Dick Warlock is shorter and stockier than Nick Castle, so the mask fit his head differently. Warlock signs his autographs as "Michael Myers H2" and is one of two actors who portrayed Michael to have an official website, the other being George P. Wilbur. 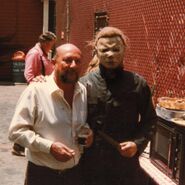