Wilbur portrayed Michael Myers in Halloween 4: The Return of Michael Myers and Halloween: The Curse of Michael Myers, the sixth film of the Halloween film series. He was the first actor to portray Michael more than once during the series, the second being Tyler Mane, who starred in Rob Zombie's Halloween in 2007 and reprised the role in 2009's Halloween II. Wilbur was also credited as a stunt player in Halloween 5, another entry in the series. His career as a stuntman lasted for 40 years and involved over 100 television and film projects, beginning with stand-in work for John Wayne in 1966. He is a member of the Hollywood Stuntmen's Hall of Fame.

Wilbur also appeared in A Nightmare on Elm Street 5: The Dream Child and The 'Burbs, and worked as an extra in many films.

He was also alluded to in the 10th season Family Guy episode "Tom Tucker: The Man and His Dream". Local news anchor Tom Tucker was said to have portrayed Michael Myers in Halloween 4 using the name George P. Wilbur as a pseudonym. 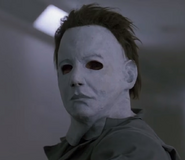 George P. Wilbur as Michael in The Curse of Michael Myers 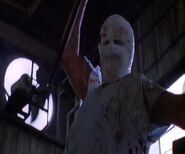 Behind the scenes of Curse