This is an article on the masks used in Halloween H20: Twenty Years Later, the only film to have more than one "hero mask".

Halloween H20: Twenty Years Later had at least four to five Michael Myers masks made for production. This is unique for the Halloween films because every other film had one primary mask design. This has led to criticism of Halloween H20, particularly towards the CGI mask that was briefly used.

Four different masks are seen. The original mask that director Steve Miner had intended for H20 is known as the KNB Mask.

Affordable mass-produced replicas of this film's hero mask have been produced by Trick or Treat Studios.

While the H20 mask was applauded for trying to look more like the original film's, it was ultimately disliked by audiences, due in no small part to the fact that there were four masks used in production. These 4 masks are the KNB mask, Buechler mask, Stan Winston mask, and CGI mask.

The Buechler mask is the mask used in the opening scene. It was made to look like the mask from Halloween: The Curse of Michael Myers.

The Stan Winston mask is the main mask in the film and is the mask mostly seen throughout the film. This was used in reshoots to replace the KNB mask in some shots. However, even though this mask look closer to the original mask, it was criticized for being too tight (Michael's eyes are often clearly visible), looking awkward, showing Michael's eyes, and having messy hair.

The KNB mask can still be seen in the movie, as they originally had that mask but changed it to the Stan Winston mask, the you see most of the time. The crew had to reshoot his scenes, but many of the long shots still contain the KNB Mask.

The original KNB mask gets some criticism, as it looked silly and the eye holes were too wide and a weird hairline, exposing most of his forehead. People said he looked like a martian. It seemed to be a blue-white color. Others praise it for having an aggressively scary look.

The CGI Mask is only seen in one scene. It received negative reactions for being pointless and looking awful.

Initial reception for Halloween H20's mask was negative. The brunt of this reaction has been towards the constant changing of the mask, which is evident throughout the film as four (or more) different masks are seen. The Stan Winston mask has garnered a better response years later for its attempt to replicate the original, but continues to receive criticism for certain cosmetic differences between the two. The H20 Winston mask features messier hair, and Michael's eyes are plainly visible throughout the film. The other masks have gained a better response years later as well. 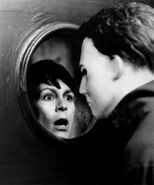