"One good scare can change your life forever."
―Lindsey Wallace

Halloween: One Good Scare is a 2003 comic book written by Stefan Hutchinson and illustrated by Peter Fielding. It is the official 25th anniversary Halloween comic. It was to be sold as a collectible at a Halloween convention in South Pasadena but is now available to buy online. This comic takes place in the H20 Timeline.

A young man named David Loomis is a doctor following in his father's footsteps, but refuses to participate in the obsession that ruined him. He is a firm believer that Michael Myers is long dead until a patient he takes on by the name of Lindsey Wallace becomes convinced that the bogeyman is after her.

Doctor David Loomis thinks of what a patient named Lindsey Wallace had once told him that one good scare could change your life forever. As he is thinking of what he was told, we see a security guard at Smith's Grove Sanitarium held up against a wall by Michael Myers who is preparing to stab the guard. David continues to think of his father, Doctor Samuel Loomis and how he did not want to continue on with his father's obsession that ruined him, but he too fell to the same obsession.

David is in his office when another doctor walks in and tells him about the newest patient. He continues telling David that the patient swears that Michael Myers is after her. David is shocked at what he just heard and the doctor tells him that the patient's name is Lindsey Wallace. Right away, David knew who this woman was, a witness to Michael rampage back in 1978. He learned that she had been in and out of therapy all of her life, had a history of drug problems, behavioral disorders and severe depression.

David insisted that he would take her on as his patient. He didn't exactly know why he wanted to take on Lindsey but he figured it was a way to get answers and would help make sense of the darkness that tore his family apart.

On one of their first sessions together, Lindsey tells David that the bogeyman is coming. She then tells him that she isn't stupid and questions his intentions on why he chose her as his patient. She assumes it is to figure out if she is as crazy as his father was. David asks her what she knows about him and she tells him that everyone in Haddonfield knows Sam and that his name doesn't go down too well over there. She then asks him if he has ever been scared.

As time went on, David grew more obsessed with Lindsey and what she had to say. He eventually started to read his father's files and realized that he was becoming like him. He read one of his father's entries

Sam enters Michael's room and tells him that it has now been five years since Judith's murder and they are not getting anywhere. He continues telling Michael that everyone thinks he is either overcome with guilt or just stupid, but Sam knew better. He also knows that everything he learned is useless when it comes to Michael. He then takes out a gun and lays it in Michael's lap. He tells Michael that there is one bullet in the gun and if he needs to kill, then to kill him. Michael does nothing and Loomis grabs him and asks the boy what he is waiting for. He then calms down and tells Michael that he will not let him harm another person again.

Over time, David began neglecting his other patients in order to spend time with Lindsey. She tells him that she is trying to be strong and not be afraid but is still having trouble. She asks him if he would believe her if she told him that Michael was still around. David tells her that there is no proof of this. She then tells him that Michael is coming to kill her but David is unsure as thought it was almost twenty-five years since he last saw her. Lindsey tells corrects him and tells David that Michael paid her a visit the year before.

Lindsey had been on release for six months and was doing okay, until she heard that Laurie Strode was found dead. When Halloween came around, she tried to carry on as normal as she could as she feared that she would get taken away. She was in her kitchen, carving a pumpkin, when she heard a crash in the hallway and she went to check things out. She found nothing but when she came back, she found that the jack-o'-lantern had various knives stabbed into it. This was when she saw the bogeyman watching her from outside and then he was gone.

Lindsey tells David that she doesn't want to live like she is and just wants everything to be normal. David is confused as to why he just didn't kill Lindsey. She then reminds him of when he stalked Laurie back in 1978 and how he let her see him at first and how he wanted to know that he was coming for her.

David decides to visit Haddonfield and thinks about how Michael's return to the town had changed everything for the citizens. He visits the Myers house and knows that just terrorizing his family wasn't enough for Michael and how no one was safe from him.

Halloween had came and by this time, Lindsey was hysterical. The doctors had her doped and put her on suicide watch. David felt obligated to stay by her side as he didn't want her in fear alone. He reflected on how Lindsey was a beautiful person but at the same time, she was filled with a sadness that seemed irreparable. He then knew that the scare that had taken his father and Lindsey seemed more like the truth then delusion he used to think.

A orderly checks in on the two and David tells him that everything is okay despite his stomach feeling uneasy. Lindsey awakens and tells him that he doesn't need to stay with her but he assures her that he wanted to. Lindsey is positive that Michael is coming for her tonight but David tells her that nothing to going to happen to her. Lindsey doesn't feel safe and asks for his assistance in letting her up, but David is unsure of what to do. Lindsey yells at him and tells that there is nothing more to say. She quickly apologizes for yelling at him. David tells her that he would help her but on the condition that she promise him that she will try to start her life over and he will help her on the way. Lindsey promises him this but once David lets his guard down, Lindsey gets up, grabs a chair and slams it into the window.

Elsewhere, Michael has indeed come to Smith's Grove and he murders the orderly and two nurses.

Back in Lindsey's room, David tries to calm her down but Lindsey will not listen and tells him that she is not going to let Michael get her and to leave her alone. Once she leaves her room, she runs right into Michael. She starts to cry as David sees Michael and they try to run away from him. They run into the guard's office and David looks for a possible escape. They soon realize that they are trapped. Lindsey looks outside of the room and doesn't see Michael anymore. David tells her that they need to move but soon realizes that Michael is standing in front of Lindsey. At this time, David hid under the desk and watched as Lindsey slipped on a pile of blood. He felt like he wanted to do something but was too afraid to try anything. He watched as Michael grabbed Lindsey, who was looking for David for help, and saw him slice her tendons so she couldn't attempt to escape. As Michael took Lindsey away, David heard her scream one final time.

David started to think over what had just happened and why Michael didn't do anything to him. At first he thought Lindsey was all that Michael wanted or maybe he didn't see David hiding. He then found a photo that let David know that this wasn't the last time the two would see each other and he would be back. It was a photograph of David with his father. David was afraid and waited for the morning to come. As he sat in fear, he thought back to his first meeting with Lindsey and how what she said, he could now understand. She told him that it can happen to anyone and ruin anyone—all it takes is one good scare.

Lindsey Wallace's body was later found, strung up in a pumpkin patch like a scarecrow with various knives stabbed into her torso. 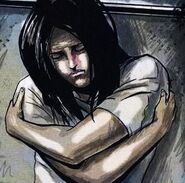