"I have spent my entire life trying to get over the paranoia and neurosis that she has projected on me."
―Karen to Allyson Nelson about Laurie Strode[src]

Karen Nelson (née Strode) is a character in the Halloween franchise. She appeared in  Halloween (2018) and Halloween Kills (2021).

Karen Strode is born as the only child of Laurie Strode, conceived after Laurie had a one-night stand with a random man, possibly Frank Hawkins, at a bar. Laurie taught Karen survival skills from an early age, having survived the 1978 rampage of deranged serial killer Michael Myers was able to defend herself against the evils of the world. By the time she was eight, Karen knew how to fire a gun, how to build traps and was able to fight. She had nightmare's for years about the house's basement, which was filled with an arsenal of weapons. When Karen was twelve, social services deemed Laurie an unfit mother and took Karen into foster care, Laurie was never able to regain custody of her daughter. Eventually, Karen met and married a man named Ray Nelson and together they had a daughter named Allyson. Karen remained estranged from her mother for many years and became resentful of the fear and paranoia Laurie had instilled within her from a young age.

On the morning of October 30, 2018, Karen prepared breakfast for herself as Ray dealt with a rat infestation that plagued the house from underneath the kitchen sink. As they spoke, Allyson emerged from the hallway and sat down at the kitchen table to complete any remaining homework before making her way to school. As Ray accidentally created a mess with peanut butter and left to clean himself up, Allyson asked Karen if she had spoken to Laurie about attending her celebration dinner for making the honor society. Karen explained that she had but that Laurie would be unable to make the dinner, clearly lying to her daughter's face to avoid speaking with her mother. Before the conversation could get heated, Allyson's friends, Vicky and Dave, showed up at the door, sending Allyson off as Karen bid her goodbye.

That night, Karen and Ray attended the celebration dinner with Allyson and her boyfriend, Cameron Elam, excited to get to know him. As the four discussed the couple's plans for the school's Halloween dance the night after, Allyson interjected and asked Karen if she had really spoken to Laurie. Just as Karen explained how they discussed it in her office, Laurie abruptly entered the restaurant and approached their table with a smile. She then introduced herself to Cameron and congratulated Allyson on her achievement. However, as Karen attempted to get her to sit down, she grabbed a wine glass and immediately drank the contents. She then finally sat down at Karen's request but immediately began breaking down, speaking about seeing Michael Myers once again for the first time in decades before running off from the group, leaving a distraught Karen behind as Allyson took off after her.

After finding Allyson comforting Laurie outside the restaurant, both Ray and Cameron helped escort her to her truck whilst both Karen and Allyson watched on. As they stood with each other, Karen began telling Allyson all about her childhood with Laurie, including being taught how to shoot a gun at such a young age, being taught how to fight at such a young age and being made to believe that they were in constant danger from Michael Myers, leading to her being taken into foster care. Still worrying about her mother's safety, Karen confided in Ray who comforted her by kissing her on the forehead.

The next day, on Halloween, Karen arrived home from grocery shopping and became extremely cautious after hearing footsteps coming from upstairs, causing her call out for Ray to check if it was him. After receiving no reply and seeing Ray enter through the back door, Karen grew even more worried until Laurie jumped out from top of the stairs and shocked them. She then reprimanded both of them for leaving their house so insecure, allowing possibly anyone to get in. She then informed them about a bus crash that happened near Smith's Grove Sanitarium, exclaiming that Michael had escaped and was on his way to chase down Laurie once again. However, Karen dismissed this information and quickly threw Laurie out of the house, also refusing her offer to keep her gun close by.

That night, after many residents of the town had already been slaughtered by Michael, both Laurie and Officer Frank Hawkins had finally convinced the police force to take Myers' escape seriously and arrived at the Nelson's house to warn them. Once Karen opened the door to her mother, Laurie began demanding to know where Allyson was, eventually learning that they had allowed her to attend the school's Halloween dance. Before leaving to seek refuge in Laurie's house, Karen immediately attempted to call Allyson but was sent straight to voicemail. Both Karen and Laurie then left her a message, instructing to come home immediately. Once Karen and Ray reached Laurie's fortress, they were led down to the basement of weapons by her and told to pick out their weapon of choice as Laurie prepared herself for her confrontation with Michael.

After looking around the house, Karen sat in her childhood room and reminisced over old photos just before Laurie stormed into the room and told her to turn off the lights in order to hide from Michael. When Karen realised that Laurie wanted Michael wanted him to find them, Laurie profusely apologised to her and hugged her for the first time in decades. However, their moment was quickly stopped after they head two gunshots come from the front of the house. Karen then stayed behind as Laurie cautiously went downstairs to check it out, only for Karen to come down behind her after hearing her yell out her name. Laurie informed her that Michael had arrived and Karen quickly realised that he had murdered Ray.

Completely in shock, Karen hesitated before running for the basement and hiding out beneath the house. After hearing many thuds and screams and watching the entrance to the basement open, Karen panicked and grabbed a gun and pointed it towards the entrance, only to see Laurie looking down at her, calming her down. Laurie then turned on the house's floodlights, illuminating any potential hiding places for Michael outside of the house. After hearing him get through the locked door and enter the house, Laurie quickly apologised for all of the hurt that she had caused Karen before preparing her gun and pointing it towards the basement's ceiling as Karen watched on in horror. Listening to Michael's footsteps, she shot at the ceiling, hearing a sudden thud right after. This caused Laurie to leave the basement to finish it, leaving Karen alone in the basement.

After several minutes of waiting, Karen heard Allyson enter the house, possibly catching the attention of Michael. In an attempt to save her, Karen emerged from the basement, called her over, and returned to hiding alongside her daughter, attempting to keep her quiet as they heard the booming footsteps descending the stairs. As the pair stood together in a worried silence, they heard the footsteps grow gradually closer until Michael was eventually right above the basement, searching for them. As he began to shake the kitchen island, Karen realised that they had to fight back and quickly grabbed the gun she used as a child, pointing it towards the basement's entrance. With Allyson crying behind her and Michael finally breaking open the entrance, Karen began to breakdown and screamed out for Laurie to help them. However, once Michael finally showed himself, she revealed it all to be an act to lure him out and swiftly shot him in the face, giving Laurie the chance to ambush him.

After Laurie finally managed to get the upper hand on Michael and knock him down into the basement, both Karen and Allyson ran up the stairs toward the exit. Allyson managed to get out, however, Karen's leg was swiftly grabbed by Michael who attempted to pull her back down into his grasp. As Laurie held onto her daughter tightly, Allyson suddenly grabbed Michael's discarded knife and slashed his wrist, causing him to let go of Karen's leg and offering her the chance to kick him in the face, sending him back down into the basement. Once he began to slowly ascend the stairs again, Karen managed to quickly pull a lever that barred up the basement entrance, trapping within the house. Laurie then activated several levers throughout the house that caused the basement to catch aflame in an attempt to burn Michael to death. The three women then left him as they escaped the flames, with Allyson running to flag down a passing truck to drive them to safety. Holding each other close, Karen, Laurie and Allyson were finally taken to safety as they believed the fight to be over.

After their confrontation with Michael, Laurie Strode, her daughter Karen, and her granddaughter Allyson are horrified when a group of firefighters arrive at the burning Strode residence, accidentally freeing Michael from the basement. Karen and Allyson submit Laurie to emergency surgery while Michael kills an elderly couple in their home. Karen and Allyson are informed of Michael’s escape, information that Karen decides to withhold from Laurie so that she can recover. Tommy organizes a mob of hundreds of Haddonfield citizens, informing Laurie of Michael’s survival.

Lance is forced to jump out of the hospital's window to his death while Laurie suffers an injury to her recent wound. Bedridden, Laurie urges Karen to help hunt down Michael with Tommy. At Michael’s childhood home, Lonnie heads in alone, but Allyson and Cameron follow and find Lonnie's body in the attic as Michael subsequently murders Cameron upstairs. Allyson breaks her leg after falling down the stairs as Karen stabs Michael with a pitchfork. She removes his mask and taunts him, allowing Allyson to escape. Karen leads Michael to Tommy's mob at a nearby alley; Michael is subsequently swarmed by the mob and gets destroyed, seemingly killed when Karen delivers the final blow with the knife. As the mob disperses, Michael gets up and slits Brackett's throat and kills the mob one by one, ending with Tommy, killing him with his own baseball bat. 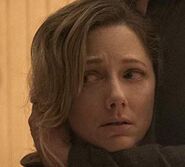