Mya Rockwell is a character featured in the Halloween film series. She is part of the continuity of the remake series, and is played by actress Brea Grant.

She appeared in the 2009 film Halloween II by director Rob Zombie.

Mya Rockwell was a young woman who lived in Haddonfield, Illinois and worked at Uncle Meat's Java Hole. She was close friends with Laurie Strode and Harley David.

Mya and Harley convinced Laurie to come to the "Phantom Jam" party on Halloween night. Mya dressed up as Columbia from the monster musical The Rocky Horror Picture Show, and Laurie and her danced and consumed copious amounts of alcohol.

After Laurie suffered a severe panic attack, Mya walked her home to 15 Cherrywood Road (Laurie had been living with Annie Brackett and her father at this point). After eating some cookies and drinking some tea, Mya and Laurie were horrified to discover Laurie's friend Annie lying in a pool of blood on the bathroom floor.

While Laurie tried to save her friend, Mya ran outside to call 911. When she re-entered the house, Michael Myers attacked her, throwing her down onto the dining room table and stabbing her to death with a butcher knife. 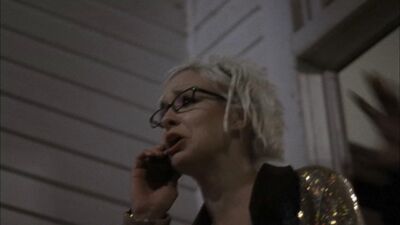 Mya trying to call for help before her demise