"I don't know what else I can do for you, Michael. You haven't said a word in fifteen years. That's a lifetime. That's twice as long as my first marriage. It's funny, but in some strange way, you've become my best friend. I've done all I can for you so I am afraid that, now don't be upset, but this is gonna be my last day, Michael. I have to move on."
―Samuel Loomis to Michael Myers[src]

Dr. Samuel Loomis is a major character in the Halloween franchise. He first appeared in Rob Zombie's remake of Halloween, played by Malcolm McDowell.

Samuel Loomis was a child psychologist who worked at Smith's Grove Sanitarium in Warren County. At one point in his life, he was married, but it did not last long. On October 31, 1990, Loomis was called by Jim Chambers of Haddonfield Elementary School to arrange a meeting with Deborah Myers. Deborah's son Michael was believed to display signs of mental illness so both men thought it would be best for Michael to get some help.

Chambers showed Deborah a bag with a dead cat that was found in Michael's school bag. Also in the bag was a stack of photographs of animals in various states of mutilation. Dr. Loomis asserted that only a deranged mind could take pleasure in such grotesque displays of violence. Indeed, later that day, Michael murdered four people including his older sister Judith.

The eyes of a psychopath

Initially, Loomis was able to maintain a steady dialogue with Michael Myers, who admitted no recollection of the murders he had committed. Michael developed an affinity towards wearing masks, a hobby which Loomis did not appear to discourage. As their sessions went on, Michael grew increasingly frustrated with his stay at Smith's Grove and wanted to go home. Loomis occasionally had to remind Michael that he could not go home because of the terrible things he had done. One of Michael's more severe emotional outbursts took place during the holiday season: Loomis had gotten Michael a new sweater for Christmas.

Early the following year, Loomis noticed that Michael was becoming more and more withdrawn. The latter rarely spoke and was never seen without one of his masks. His mother, Deborah, came to see him once a week. During one of her visits, Deborah tried to cheer Michael up by giving him an old photograph of himself and his infant sister, "Boo". Following the visit, Doctor Loomis began walking Deborah out to her car. On their way out, Loomis talked to Deborah about considering shock treatment for Michael. Just as they entered the elevator, the hospital alarms sounded and orderlies rushed into the visitor center. Loomis knew something bad happened, so he and Deborah chased after them and found that Michael had murdered an attending nurse named Wynn. Michael was subdued, but the incident had a profound impact on Deborah, who finally realized that her child was an unrepentant monster. She committed suicide a short time later.

After the death of Deborah Myers, Michael became nearly catatonic. He barely moved, and ceased to speak altogether. Loomis stayed with Michael, observing his behavior for the better part of fifteen more years. Ultimately, he concluded that nothing could be done for him and resigned himself to the notion that Michael Myers was no longer human, but a creature of pure evil. He documented his work with Michael in a best-selling book he called The Devil's Eyes.

One evening, something inside of Michael's mind snapped and he broke out of Smith's Grove, murdering several staff members in the process. Administrators Morgan Walker and Doctor Koplenson telephoned Loomis at home and he came down to the sanitarium. Walker had no idea how to proceed with capturing Michael and acted as if he did not know where the latter was heading. Loomis fired back, "It must be great living in denial, I must try it some time." followed by "You know exactly where he is going". After learning the details of the escape, Loomis drove to Michael's home town of Haddonfield.

He went to the Haddonfield cemetery, where he spoke with the caretaker, Chester Chesterfield. They discovered that the headstone for Judith Myers' grave had been removed and replaced with the crucified remains of a dead animal. Taking no chances with Michael, Loomis stopped at a gun shop and purchased a .357 Magnum. He then consulted with the local sheriff, Lee Brackett. Brackett had heard of Loomis via his book, and was not impressed by anything the doctor had to tell him. Loomis insisted that Michael Myers was on his way to Haddonfield and that everyone was in danger, in particular a young woman named Laurie Strode. 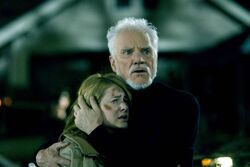 Brackett told Loomis what he knew of the Strode family. Seventeen years earlier, he responded to a 9-1-1 call relating to the suicide of a woman named Deborah Myers. Brackett found the infant Laurie in the house, but to avoid having the child grow up with the stigma of the Myers name, he omitted her from his official report, drove into the next down and dropped her off at the hospital. He found out a few months later that the baby had been adopted by a friend of his, Mason Strode. Loomis put the pieces together and realized that Michael had discovered somehow that Laurie was his sister.

The two were driving towards the Strode house when Brackett received a 9-1-1 call from Laurie herself, originating at the Wallace home. They drove to the house, where Brackett found his tortured daughter Annie bleeding in the foyer.

Loomis tracked Michael down to the old Myers house and found the killer just as he was attempting to murder his own sister. He shot Michael several times in the back, but this only stopped him for a few moments. He ushered the frightened Laurie into Sheriff Brackett's car, but Michael revived and came after her again. He pulled Laurie out of the police cruiser and began dragging her into the house. Loomis pleaded with Michael, begging him to let Laurie go. He told him that he had failed him and that Laurie should not have to pay the price for his mistakes. Michael grabbed Loomis with both hands and squeezed his skull, then dragged him back inside the house. As Michael pursued Laurie, Loomis, who was struggling to get up, grabbed his foot to try and stop him. Michael shook him off and Loomis lost consciousness.

Following his confrontation with Michael, Loomis was taken to Haddonfield General Hospital, where he recovered from the attack. Michael vanished without a trace and Loomis believed him dead, blaming the missing body on "police incompetence". Two years later, Loomis had written another book about Michael, entitled The Devil Walks Among Us. This time, he included the knowledge that Laurie Strode was the killer's younger sister. Loomis went on a tour to promote the book, doing various interviews and press conferences. During one of these conferences, Jane Salvador, Bruce Cabot, and many other reporters started to ask him questions about Michael's whereabouts, to which Loomis angrily replied that the killer was dead.

The next day, after Loomis had an interview with a young reporter named Wendy Snow at the Myers house, his publicist Nancy McDonald referred to his campaign as "disgusting". At a book signing, Loomis met some of his fans, including Chett Johns, who seemed to be more of a fan of Michael than Loomis. Chett's attitude took Loomis off guard for the next guest, who turned out to be Lynda Van Der Klok's father Kyle. Kyle pulled out a picture of Lynda and asked Loomis if he knew who she was. When Loomis answered in the negative, Kyle threatened Loomis with a gun, blaming him for his daughter's death.

After Kyle was subdued by the police, Nancy told Loomis that he was toying with people's lives and that there would be serious repercussions. Following an appearance on the Newman Hour, where host David Newman and guest "Weird" Al Yankovic took a humorous approach to talking about Michael and his victims, Loomis realized that he was being "an asshole" and decided to put an end to his tour. He then discovered from a news broadcast that Michael was alive and had taken Laurie hostage in a shack outside Haddonfield. Loomis travelled to the shack, but Sheriff Brackett, whose daughter Annie had just been killed by Michael, refused his help.

Loomis made his way into the shack, telling Brackett "I owe you this!". Once inside the shack, Loomis told Michael that Laurie needed to come with him. Loomis tried to get Laurie to do just that but she was now quite deranged and thought a young Michael was holding her down. Loomis started yelling at the girl, telling her that no one was holding her, upon which Michael pushed him. Michael threw him down and killed him by slashing his face and stabbing him in the chest.

In this edition, Michael tackled Loomis through the wall of the shack, then picked him up as he removed his mask. Loomis pleaded, "Michael, we're going to Hell...", but Michael stabbed Loomis and yelled "Die!". With Loomis dead, the police opened fire on Michael, killing him. Laurie, now completely insane, left the shack, picked up Michael's knife and walked over to Loomis' dead body. Against Brackett's orders, the police reacted by opening fire on Laurie.