"The Shape" mask is the original Michael Myers mask, usually thought of as the quintessential Halloween mask.

After his escape from Smith's Grove, Michael Myers stole the mask from a local hardware store and used it to murder several teens on October 31, 1978. Later that night, Michael tracked his sister to Haddonfield Memorial Hospital and continued his killing spree until Dr. Samuel Loomis ignited one of the hospital rooms and caused a large explosion that destroyed the mask.

After his escape from Smith's Grove, Michael Myers stole the mask from a local hardware store and used it to murder several teens on October 31, 1978. Later that night, Michael was captured and his mask was apprehended. Four decades later, Journalist and podcaster Aaron Korey has possession of the mask that he somehow acquired from the authorities and shows it to Michael as the other inmates in Smith's Grove yell and laugh hysterically.

After Michael's escape, he steals a vehicle and hunts down the pair. After killing Aaron and Dana he regains control of the mask.

In 1978, during the making of the original Halloween, the prop department was faced with the enormous task of finding a frightening mask that the villain could wear, but only the cheapest one in the costume store. The crew chose two masks for Michael Myers to wear but they had not decided yet. The first option was a Don Post Emmett Kelly frowning clown mask that they put frizzy red hair on. This was an homage to how he killed his sister, Judith in a clown costume. They tested it out and it appeared very demented and creepy. The other mask was a 1975 Captain James T. Kirk mask that was purchased for around a dollar. It had the eyebrows and sideburns ripped off, the face was painted fish belly white, the hair spray-painted brown, and the eyes were opened up and reshaped more with scissors. They tested out the Kirk mask and the crew decided that it was much more creepy because it was emotionless, much like Michael himself. This became the Michael Myers mask. Since then, every mask used in the films have been modeled after this design. William Shatner admitted that for years he had no idea his likeness was used for this film; it was only during an interview that someone mentioned his mask was being used. He has since stated that he is honored by this gesture. He even wore a replica of the mask once when he went trick or treating with his young daughters as Michael Myers because he found the premise amusing.

Affordable mass-produced replicas of this mask have been produced by Trick or Treat Studios.

While both Debra Hill and Dick Warlock have confirmed the mask from Halloween II was the original, many fans have still claimed it to be different. This has been largely due the slightly different appearance the mask possesses when compared the first film. This was primarily due to the different shape of Warlock's face when compared to Nick Castle's. The mask had also aged in the three years between films, and possessed a slight yellowish color due to Hill's constant smoking as the mask remained under her bed in a shoe box.

After production had wrapped, thinking that it would be the last Halloween to feature Michael Myers, Dick Warlock was permitted to keep the mask. This would be a move that Moustapha Akkad and crew would regret as Michael Myers would be reintroduced seven years later. 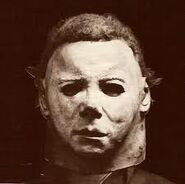 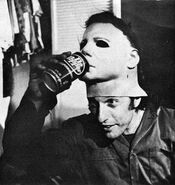 The Shape Mask In 2017
Community content is available under CC-BY-SA unless otherwise noted.